Outside the Netherlands, of course, branches have been found mainly in Germany (especially in the states of Lower Saxony and North Rhine-Westphalia). In addition, some loose reports in the rest of Europe and the United States. 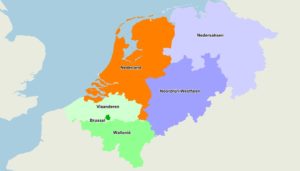 In this state, where the city of Dorsten is also located, there have been many reports from a long time ago. Often it concerned people who came from here (and not directly the name) and Dorsten also had good connections with the diocese of Cologne and clergymen regularly came from here. Various reports have also been reported in the old administration of the Holy Roman Empire. A little later in time there are some interesting reports in Soest (DE), Dortmund, Münster, but also many other places. To the west of the town in the 17th century there are various reports in the vicinity of Emmerich and in Rees a small branch arises that partly continued in Amsterdam.
South of the town of Dorsten, many reports are often in small branches in Dinslaken, Dortmund, Moers, Rheinsberg, Düsseldorf, Cologne and Elberfield. Chances are that many of them, and certainly those of Dinslaken and Dortmund, are related to the two small surviving family trees in this region.

There are many reports in Lower Saxony, but most of them have to do with the well-known family trees. There are a few interesting reports in Osnabrück in the early 14th century and in Göttingen in the 16th century. And then a number of separate reports here and there.

Outside the two German states mentioned, there are also some (early) reports in, for example, Rostock, Heidelberg and Mannheim. The first magistrate of the oldest university in Germany (Heidelberg) was called Hendrick van Dorsten (late 14th century). The even older reports in Rostock are probably related to a Hof Dorsten in Wismar in the 13th century.

Outside the Netherlands and Germany, there were not many reports before 1800. There are a number of reports in Belgium, but that was part of The Netherlands at the time. There are some loose reports in France (especially Napoleon’s army), the United States (18th century, early emigrants), the Dutch East Indies and in Riga (late 14th century, presumably ancestors of the Neuenhaus family tree).