In the West of the Netherlands, with the provinces of North and South Holland, there have of course been various branches (small and large) from the well-known family trees. Outside this area, mainly small twigs and loose data have been found in North Holland. Much more and older information has been found in South Holland. There have been several branches of a considerable size (especially the Rotterdam area).

Many and diverse reports and references have been found in all possible archives of people with the name Van Dorsten (or name variants). And in addition to being used as a family name, it was also regularly the place of origin of the persons because until the 17th century, Dorsten was an important Hanseatic city from the 13th century and was also strongly focused on the Netherlands.

In this province there are several small branches, especially in the 17th century, almost all of which cease to exist after one or two generations (no name holder or perhaps the use of another name). By far most of it is in Amsterdam, but there are also some reports outside. 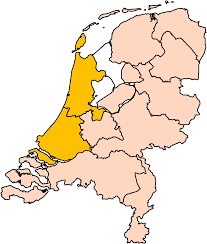 Amsterdam
There are of course many mentions in the largest city (since the 16th century) and capital of the Netherlands. Until the mid-17th century, these were many burgesses and people who probably actually came from the town of Dorsten. In addition, many separate unrelated reports and branches of most other known family trees. A few small branches are still interesting and well known.
At the beginning of the 17th century there was a well-known poet / writer Joost Krijnen who was sometimes linked by researchers to the Dordrecht family tree. However, further analysis shows that it comes from Poorter Joost who comes from Dorsten to Amsterdam in 1549. Son Krijn was a bookseller with a son Joost (the poet) and Balthazar (bookseller). This take ends in the 17th century. Another interesting branch is that of Rutger Jans (usually Van Dorssen), who married in Amsterdam in 1602, had previously been married in Leiden in 1585 and perhaps the same as the one who married in Rotterdam in 1584. In that period there are also two burgesses with that name (Leiden 1584, brewer from Zwolle; Amsterdam 1568). He is probably the blacksmith in the army mentioned in Brabant in 1611. This branch also came to a dead end in the 17th century.

Others
In Haarlem a Pieter van Dorsen and Leendert Janssen van Dorsen were both interesting around 1700 with the necessary births and events, seem related to the Vreeland family tree. Also Frans van Dorsten, seems to be the ancestor of Frans in Oijen. In addition, there are several separate reports in Enkhuizen and Alkmaar.

The province of South Holland has several surviving and extinct family trees, as well as various small branches and many separate references from the end of the 14th century! The most important trunks and branches have been found in Rotterdam and Leiden, but in addition a lot has been found beyond that and there has been the well-known family tree of Dordrecht.

Rotterdam
There have been two tribes in Rotterdam. One tribe started with schoolmaster Jan who was fired in Hoogvliet and ended up in Brielle in 1612. He was also captain of a crew of gunmen, died in 1647 and his grave can still be admired. He appears in various references and was quite wealthy. His lineage continued in Rotterdam with a rich merchant family (son Maximiliaen, grandson Daem) until the end of the 18th century. The other tribe begins with ships Teunis Teunis in Capelle aan de IJssel, who married there in 1675 as a young man from Nieuwerkerk aan de IJssel. He is also quite wealthy and remarries in 1697 in Rotterdam. This tribe continues here until the early 19th century. And then there are of course various separate reports and branches of well-known family trees.

Leiden
A large branch from the Bramsche family tree was started here around 1750, but before that too there were many reports (including burgesses who came from the city of Dorsten) and a small tribe that existed from the beginning of the 17th century to the end of the 18th century.

Others
Various reports have also been made in the rest of the province and small branches in The Hague, Gouda and Gorinchem. In the latter cities in particular, there is still much to be gained if transcripts are made of the church books. There are already these for the other important cities in this province (Rotterdam, Delft, Leiden and Dordrecht).