Background – Spread of the Name

It’s hard to say over the last 1000 years how and why people with the name Van Dorsten are geographically spread, but there are a number of important causes. Also the mobility increased in the course of time, formerly most people remained in the same area to live and work. It depends of course on the origin, which is assumed to Dorsten (rich Hanseatic City since 12th/13th century), but also Dorst (poor agricultural community near Breda). You’ll then see that the spread from the city of Dorsten is much broader and with more various reasons (as described below), where the people from Dorst especially could be found in that area (with the name of Van Dorst, but with an exception for Van Dorsten in Dordrecht). The phonetic definition of names made it also not always clear.

Which in any case stands out, is that before 1500 already in multiple locations in Northern Europe (Rostock, Riga, Neuenhaus, Utrecht, Kampen, Arnhem, Zwolle) wealthy families Van Dorsten have been found. Indication of their wealth was also that they sometimes married people of nobility. This wealth must be (most probably) from the trade. The question is then whether there are multiple rich families, who are also spread about North Europe and called themselves Van Dorsten. The chance seems reasonable that this is traceable to the same family. In the Chronicle of Neuenhaus the genealogists related the richness as possibly from the later crusades in Eastern Europe, based on the family coat of arms.

Faith used to be very important for the people. The place Dorsten belonged to the Archdiocese of Cologne and was an important city. The current Archdiocese of Utrecht then belongs to the Archdiocese of Cologne too and has only been separated in 1559. Both belonged to the Holy Roman Empire (extensive adm online). Between 1250 and 1550 there are several clerics found in the archives with the name and/or origin of Dorsten. These came often in other places or traveled for the faith through the region.

Also the sons who became soldiers, led to spread of the name and could unexpectedly pop up in other garrison cities or war areas. In the wars of faith (such as the thirty years war in Germany and the eighty years war in The Netherlands) certainly people with the name have been involved. A challenge was that the administration was not always complete (or lost) and that just a tribe could show up or disappear.
When the VOC and the WIC started to dominate the world trade (the golden age of Netherlands), there were also many soldiers (and other professions) in service that could be found in their administrations and settled in the various countries. 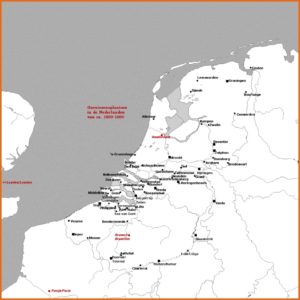 A reason for people to have somewhere to leave was doom from the outside, such as wars, looting, disease and fire. The most important (relevant) wars are also listed on the home page in the context image at the top and at the Background Context History. Listed below are some (possible) relevant effects appointed by wars and disasters:

On the site CBGfamilienamen.nl you can see how the spread nowadays is in the Netherlands.