Extinct – South of the Netherlands 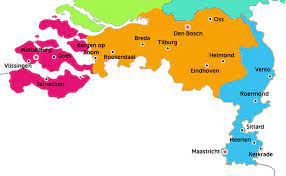 In the south of the Netherlands, with the provinces of Zeeland, Limburg and Noord Brabant, not many twigs from the known family trees were observed before 1811. In addition, there were very few reports in Zeeland until 1700 and a limited number of reports in Limburg. There are many reports in Noord Brabant. In the middle and east this concerns a limited number of reports, mainly from Van Dorsten. In the west it concerns a lot of reports, but mainly Van Dorst (from the village near Breda). After 1700 there will be many more, this also extends to Zeeland. Yet there was also a considerable tribe of Van Dorsten in Breda.

Many and diverse reports and references have been found in all possible archives of people with the name Van Dorsten (or name variants). And besides being used as a family name, it was also regularly the place of origin of the people. Below is a description per province.

There are not many reports in Zeeland. There is a small branch in Breskens, a reasonable branch in Middelburg that comes from Zaltbommel and a number of reports, mainly in Middelburg and a few loose ones outside. In the last hundreds of years there have been quite a few Van Dorst reports, but they really belong to those family trees.

In the 17th century, several small branches of Van Dorsten were found here, but relationships with other family trees cannot (yet) be made.

There are very many mentions in the province of Noord Brabant, with the vast majority in Breda and further around the village of Dorst (Oosterhout, Tilburg), but this usually concerns Van Dorst. Yet there was also a family tree Van Dorsten in Breda and the family tree of Dordrecht via Breda was also created. There are quite a few separate reports and small branches outside, but that often concerns Van Dorsten. The first reports about Van Dorst are from the end of the 14th century and Van Dorsten at the beginning of the 15th century!

Breda (also Teteringen and Princenhage)
In Breda and the surrounding area there are many reports and various small branches (almost all Van Dorst). There are two family trees and the other branches are probably related. One tribe starts at the beginning of the 17th century with Vincentius (Bernaert?) Lucassen and is the only branch / tree also called Van Dorsten next to the one who went to Dordrecht. This later became extinct (by surname). The largest and most interesting branch concerning Van Dorst is that of Joannis and Cornelis Adriani (both also known as Muijsers) who were born around 1590 in Princenhage with a considerable descendent tree (to be further investigated after 1700). Probably this family tree will continue to our time. Most of the other loose branches in the region are probably related to this.

Other “Van Dorst”
In the region there are still various branches to be found in Zevenbergen, Zundert, Nispen-Essen, Oosterhout and Tilburg. Tribes of this may also survive. The mutual relationships at that time have not yet been or are difficult to establish.

Other “Van Dorsten”
In addition, various branches of Van Dorsten have been found in the region (and especially outside the west of North Brabant). For example, there is a loose reasonable branch in the 17th century near Veldhoven interesting, but its origin cannot be determined. Various loose mentions at Den Bosch in the 16th and 17th centuries seem largely related to soldiers, sometimes they can be related (not sure) to mentions in other garrison cities. An interesting branch is also the one in Oijen. A Frans Frans from Haarlem gets married here and his children go back to Rotterdam.