This is the oldest (back to 1500) family tree concerning the name Van Dorsten. It originated in Neuenhaus (Germany) just across the Dutch border in the province of Overijssel. Descendants still live here. From there in the 18th century a large branch was derived to the Netherlands and from there later also to South Africa and the US. This used to be a prosperous and important family for the city of Neuenhaus that provided several mayors. That is why this family tree has already been examined several times by genealogists in the 20th century and various documents (including Die Chronik der Familie Van Dorsten) have been published about it.

The ancestor is Borchard van Dorsten which should be born around 1490. Where those exactly came from is not clear. According to the record attended the first Borchard already in Neuenhaus and there are even oral traditions that already around 1440 the first Van Dorsten came in Neuenhaus. This first Borchard had a lot of money. From where he got this is not certain, but the presumption expressed in the Chronicle is that this family might be at the Crusades to the Baltic Sea and earned there a lot of money. This is partly based on the family coat of arms. Borchard had at least two sons: Borchard, born around 1520, and Herman, referenced in the period 1533-1536 (so probably a bit older than Borchard). The son Borchard was brewer and wine merchant and was mayor of Neuenhaus in 1542, 1550, 1553, 1560, 1566 and 1566 (probably the whole period). On 1 June 1594 he was imprisoned by Spanish troops and burned along with 60 other citizens!

On the further analysis is already the necessary told in the Chronicle. Here is mainly described which new information is found and what the inconsistencies are between the various sources. In case of inconsistencies the various sources are explored and analyzed as well as possible and the most logical elaboration has been chosen. The Borchard of 1521 had two sons, Johannes (Jan) and Hermann, described below.

Son Jan had at least also two sons, Borchard and Derck, and some daughters. In the descendants of this branch are several mayors and several marriages with wealthy families. There are also found some inconsistencies in the sources (Chronicle, MyHeritage family trees, BDM) and some additions in the BDM (Baptism, Death, Marriage) of Neuenhaus found. For now, this branch didn’t proceed. Borchard got at least a son John, who has followed several studies at several universities, became master in law and was mayor of Emden (gone there during the thirty years war). He had at least one son and a daughter. Also Derck got at least a son Johannes with several children that went to Nordhorn. Also here the branch stops, but it’s good possible this proceeds elsewhere, especially in Germany to the south or east. There is at least an archive reference in 1706 to a Borchard from Ratingen that sells land at Zutphen (close by in The Netherlands). This could be well from this branch (because of the name Borchard), but also from the branch below.

Son Herman had at least a daughter Anna, who was married with judge Eilhard Krull, and three sons Petrus, Anthony and Borchard. Petrus was enrolled in the University of Groningen in 1616. Presumably, the same Peter with wife registered in 1655 in Zwolle and died there in 1664. For now nothing more is known about him. Also about Anthony, as well known as Weiland Anthony, is not much known. In the elaboration on MyHeritage (from Yvonne) another branch is described under Anthony, but in no other source has been found anything about this . So most probably that’s not right. For the son Borchard four sons are known:

There are also the following findings and remarks: 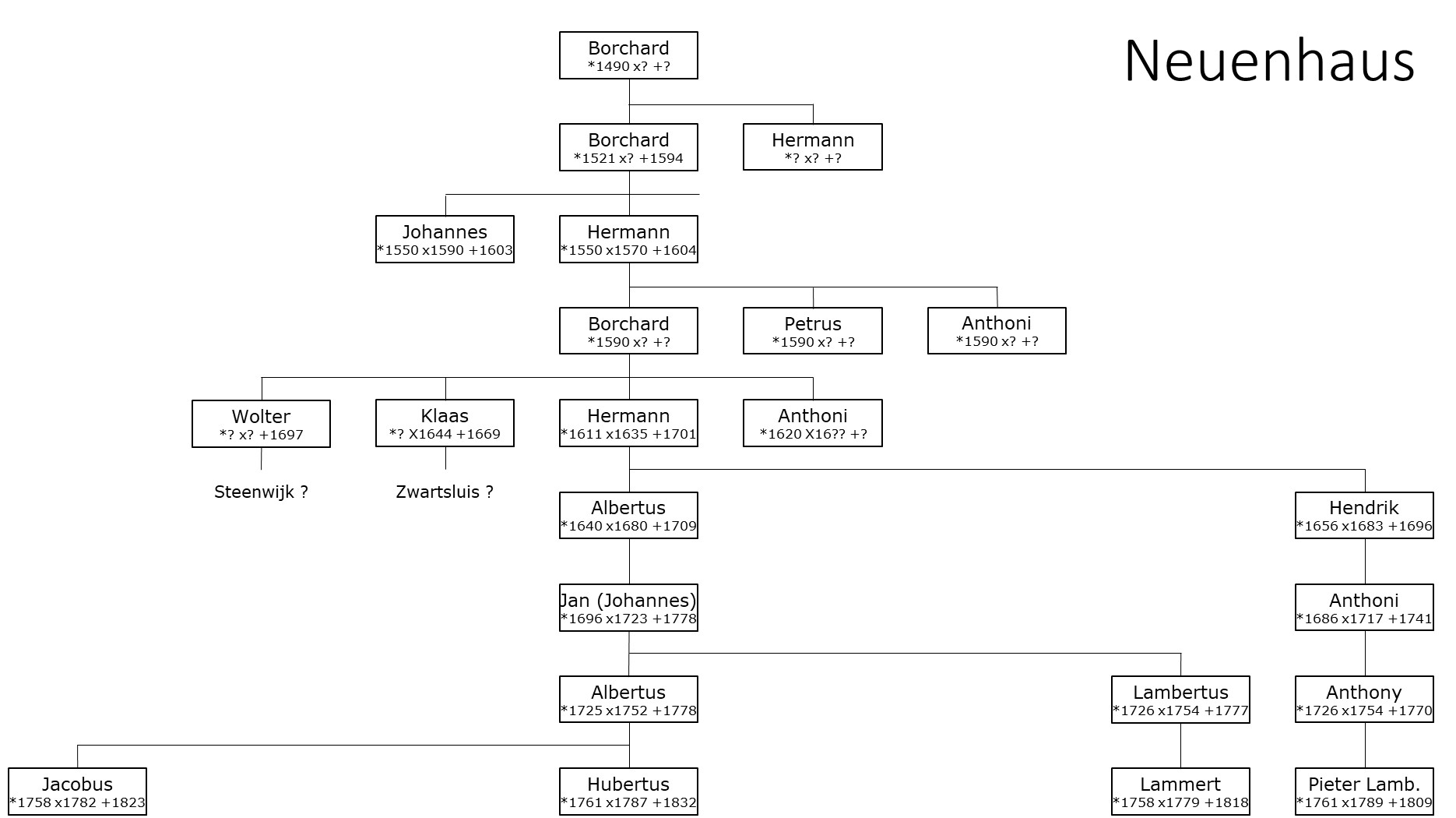