In the north-eastern part of the Netherlands with the provinces of Groningen, Friesland, Drenthe, Overijssel (adjacent county of Bentheim in Germany) and Gelderland, it seems that most of the data found are related anyway. In addition to the surviving family trees of Neuenhaus, Zwartsluis and Steenwijk, most other data also seem to be related to this. Many and diverse reports and references have been found in all possible archives of people with the name Van Dorsten (or name variants). And in addition to being used as a family name, the Hanseatic town of Dorsten was also regularly the place of origin of people. Because provinces (region) used to be much more important, a description is given below per province.

Few reports and references have been made in Groningen and Drenthe. Friesland did have the necessary small branches and unloading mentions, but this mainly concerned the period around 1700, and especially soldiers with their families.

The province of Overijssel is a region with many mentions and references from very early days. In addition to the trees of Zwartsluis and Steenwijk that originated here around 1700 (and probably derived from Neuenhaus), there are also many other (and older) references here. There is also a reasonable chance that it is related to Neuenhaus. What is striking is that many family trees in this region in the 18th century flared up to Amsterdam. Before 1550, there are mainly reports from the Hanseatic cities (partly because they already had more administration) and a number of separate reports here and there. A number of locations and tribes are worth noting: 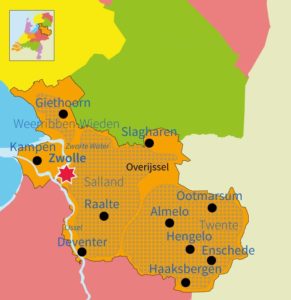 The province of Gelderland is also a region with many mentions and references from very early days. However, of most of the loose branches found here, no relationships with the known pedigrees have yet been found and no current descendants. Smaller or larger branches have been found in various cities: Zutphen, Arnhem, Nijmegen, Doetinchem, Zaltbommel, Tuijl and Harderwijk. In addition, the Amersfoort family tree once originated in Doesburg and the Dutch branch of the Neuenhaus Family Tree initially established itself in Arnhem via Groningen. A number of locations and tribes are worth noting:

There are no more name bearing descendants of other branches. All the material found here is expected to match the Neuenhaus (and Zwartsluis / Steenwijk) family tree. The challenge therefore becomes to be able to establish those relationships in the future.