There are a number of possible origins for the origin of the name Van Dorsten which are all explained below:

The main origin of the name of Dorsten is the place Dorsten (comprehensive German-language description on Wikipedia) at the bottom of the German land of Lower Saxony (right above the Ruhr area and the State of North Rhine Westphalia and not far from the Dutch border at Gelderland). It got already city rights in 1251 and belonged to the most important Hanseatic cities. At the time, the place Dorsten was mainly focused on the current Netherlands (given the trade) and other Hanseatic towns in Northern Germany and around the Baltic Sea. In the Westphalian it is Dössen, the German name is Dorsten.

The region near the town of Dorsten was already early inhabited and the Romans had here around the beginning of our era been a fortress, built a bridge over the Lippe and a castle. In late Antiquity until the end of the 5th century a village (upper) was built carrying the name “Durstina” and that lay North of the Lippe. At the same time was also a farm with vineyard on the South side built with the name “Durstinon”. This was at a shallow Ford in the river. In the two hundred years after, the area to the South of these Christianized and came to belong to the Archbishop of Cologne. Later, the area north of the Lippe Christianized from the Archbishop of Utrecht. The town of Dursten, probably in the Carolingian family Maiores Domus, was in a donation of Plectrude (+ 725).

In the beginning of the 10th century (around 900-910) Athalgard donates in memory of her dead husband Abbo the Abbey Werden in Dorsten a court, which later was called Leemwysche, and courts in Galen (Dorsten-Hardt and Ostrich). The Court in Dorstinon had to sell and organize hostels nature and belonged to the Court Heldringhausen in Recklinghausen. Abbo and his widow Athalgard are the first aristocrats of a noble family in Dorsten, belonging to the glory in and around Dorsten. This Dominion of nobles of Dorsten persists until the 11th century when the family becomes extinct. The monastery in Xanten draws here a parsonage and extends the belongings from and by the end of the 12th century a church village with the name Dorsten (on the site of Durstina). In 1176 the first church was built.

The fledgling settlement grew particularly due to its strategic location at the Lippe (long time here was the only bridge over the Lippe between Wesel and Haltern) and its location on major trade routes to Cologne about Bottrop, Essen, Münster and the way to Recklinghausen. In 1251 the Bishop of Cologne in consultation with the graves of Kleve granted city rights to Dorsten. In 1334 the first city wall was built; the city by the location on the Lippe was a member of Hanseatic League in the 14th century. Dorsten has gained great wealth through trade and shipbuilding and became the richest city of the fortress Recklinghausen. In the heyday of the 15th century, Dorsten exists of about 300 houses. In 1459 the plague prevailed in Dorsten.

In 1567 the city weighhouse to the market was built, which later also served as town hall. By the faith wars at the end of the 16th century and, above all, by the thirty years war at the beginning of the 17th century, trade and traffic came to a halt and attacked the Hansa apart. In 1641, there was the siege of Dorsten and up to the 18th century, the place regularly was besieged by armies of foreign powers. 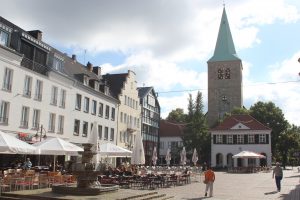 Although the name is Dorst and most people coming from here in the 16th century called themselves Van Dorst, is in any case of the Dordrecht tribe demonstrated that these came from Dorst and there was another strain of Van Dorsten in Breda too, which probably came from here. Exactly known is the origin of the name “Dorst” not (C.J. Walker). It is very likely that the name originated from “the horst”, an elevated strip of land, which in many cases, settlements were founded. One wrote the names on as one she uttered: “de Horsten” was, quickly pronounced, “Dorsten”. Much later, the name “Dorsten” changed to “Dorst”.

Dorst was first mentioned in 1290, then in 1323 and then regularly. Willem van Duivenvoorde in 1325 was lord of Oosterhout and, therefore, also from Dorst. In 1511 was the first mention of a chapel. The village was poor: North lay a skimpy heathland area and in the South it was found a marshy area, the Goor called. To put in the living one in the goat breeding. Goats milk, which also supplied to the health of farmers and their children was of great importance. From the end of the 15th century, in the area (Breda, Oosterhout) there are many reports in the archives of people coming ‘van Dorst’.

According to the family tree of Jutphaas (see analysis there) it is originated from this place. Below is a brief overview of the history of Dorssen and the doubts that you can place in this.

The (still existing) name Dorssewaard is according to theory named after the settlement Dorssen (Dorsken, Dursken) who have been here in the seventh or eighth century would have been present. Some have described the settlement on the site of the current Vreeland, others think rather just across the old Vecht. At the archaeological research in this area are, however, no vegetation horizons, archaeological indicators or other indications for habitation remains found. At the onset of Vreeland (see below), however, it no longer existed.

To defend the border of its area and to prevent anyone else from toll would impose on the Vecht, the Bishop of Utrecht from 1252 onwards built the castle “Vredeland” on a higher place in the bend of the river Vecht. This River was an important trade route from Utrecht to the Zuiderzee (and on to the Baltic Sea). The building of the castle gave the boost up to the growth of Vreeland that got town rights in 1265. The city Vreeland has never become a full fledged city, partly because many craftsmen were transferred around 1275 to the emerging Amsterdam.

In “The Lords of Amstel 1105-1378; Their attendance in the Nedersticht of Utrecht in the twelfth and thirteenth century and their location in the Duchy of Brabant after 1296” (translation of the title) by Th. A.A.M. Van Amstel is an analysis with respect to jurisdiction, taxes and collation rights in the format around the Overmeer. It shows, that the Bishop of Utrecht the case-law to the West of the river Vecht and the collation Church right of Nigtevecht had reserved for himself. East of the River he had the chapter of Saint Marie endowed with virtually the entire jurisdiction with taxes. The generations of Wulven and van Amstel turn out to own rights to the surrounding area.

Comments on Dorssen as origin:

The Court Dorsteen is sold in 1277 by Duchess Anastasia of Mecklenburg to the city Wismar and also earlier that century already mentioned and in the centuries after. It was owned by two Knights of Threshing Lewetzow and was first called Dorsteen and only then Dorsten. In the period 1359-1390 a variety Van Dorstens were reported in the nearby Hanseatic City Rostock. These could be from the Court, but also from the (other) Hanseatic City of Dorsten.